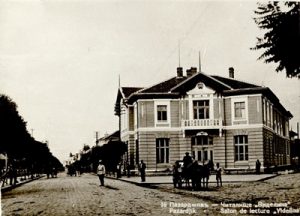 In 1980 the museum together with art gallery Stanislav Dospevski are moved to newly constructed building in the centre of Pazardzhik. Special ceremony has been organised for the opening under the auspices of Lyudmila Zhivkova.
Pazardzhik History Museum that started as amateur endeavour of group of patriotic Bulgarians established itself as community centre museum and then grew into state cultural institute of district and regional importance now occupies important place within the national museum system.
The permanent museum exhibition is housed in several halls each dedicated to a specific time and topic. An extended period of time is covered from Prehistory to modern Bulgarian history. The Ethnographic Exhibition is accommodated in an authentic Vazrazhdane period house and the birth home of Konstantin Velichkov harbours the artefacts related with his life and work.
Archaeology Hall offers to the visitors artefacts related with the material and spiritual culture of Pazardzhik and its surrounding region: reconstructed Neolithic house interior, Neolithic and Chalcolithic anthropomorphic and zoomorphic clay vessels, wide variety of ritual statues and objects, antique and medieval coins, weapons, adornments and one of the richest collections of votive tables of the Thracian horseman.
Vazrazhdane Hall gives glimpse of Pazardzhik region in the years of Bulgarian National Revival up to the Liberation of Bulgaria in 1878. The exhibition also presents the participation of the locals in the national liberation fights and the April Uprising (1876). The displayed items are original and are part of the rich museum funds, some of them include weapons, coins, articles belonging to the trade guilds, old printed books. More than 200 authentic pieces illustrate the central themes – the economic development of Pazardzhik as trade centre; the struggles of the local population for independent Bulgarian church, education and national liberation.
Modern History Hall actually comprises of three interconnected halls. The first hall showcases eminent Pazardzhik citizens that participated in local government after the Liberation. Special place in the exhibition is allocated to famous historical and architectural monuments in the town – East Orthodox Cathedral Church Uspenie na Sveta Bogoroditsa (Saint Assumption of the Holy Virgin) and the Old Post Office building. There are also presented the architectural plans of Pazardzhik prepared at the beginning of 20th century by renowned local architects. In the second hall are demonstrated some of the trades typical of thee period – tailoring, rope making, hat making, basket weaving, metalworking etc. Also special attention is paid to the development of agriculture in the last century illustrated with numerous photos, documents and original materials. The third hall is dedicated to educational activities. The exhibition shows the cultural, educational, sports and charity organizations in Pazardzhik set-up by the influential public figures at the time. People that played important role in the cultural life such as writers, poets, artists, journalist, musicians etc. are also commemorated in this hall. 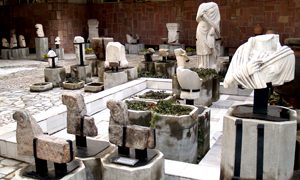 The museum Lapidarium accommodates archeological finds that are not displayed in the museum halls. The items are arranged in chronological order and constitute a diverse collection of statues, road columns, sacrificial alters and stone idol statues. There are also displayed different architectural elements such as capital columns, column bases, pilasters and architraves. 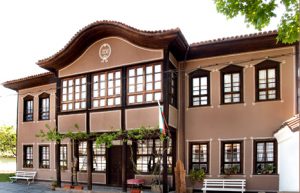 The Ethnographic Exhibition is housed in what used to be the largest residential building from the period of Bulgarian National Revival Vazrazhdane. It has been built in 1850 in the so called Plovdiv Baroque style and its owner Nikola Hristovich was rich merchant. The house is declared architectural and artistic monument of culture. The exhibition highlights the richness and diversity of traditional Bulgarian culture typical of the following ethnographic regions: Upper Thracian Plain, Sredna Gora and Rhodope. The museum fund at the Ethnography Department keeps valuable evidence related with everyday life, means of livelihood and the spiritual life of the region. The exhibits form 15 separate collections: objects of town lifestyle, clothes, instruments and works of craftsmen, tools used for land cultivation and logging, architectural details, folk music instruments and items related with folk culture.
The birth home of Konstantin Velichkov (1855 – 1907) has been turned into exhibition area of Pazardzhik History 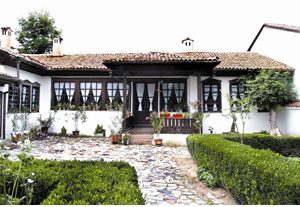 Museum. The house is declared architectural, artistic and historical monument of culture of national importance. The original house interior has been reconstructed as part of the exhibition. Rich collection of pictures and documents give information about the family environment and personality of Velichkov, his contribution to Bulgarian history and culture being eminent public figure, active participant in the national liberation fights, politician and statesman, writer, translator and artist. The museum is one of the centres of cultural events and celebrations. The traditional Velichkov Days events occupy special place in the cultural calendar of Pazardzhik. 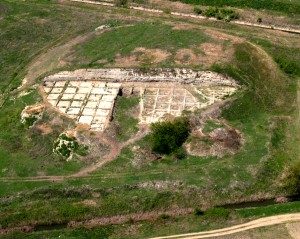 Another site under the museum management is Yunatsite Tell situated near the village of the same time. The results gathered after 40 years of archaeological excavations at Yunatsite Tell are of great importance to Prehistory scientists. New information has been revealed about settlement structure, house building, economic and spiritual life and the burial rituals of the most ancient dwellers of the tell that inhabited it over a period of several thousand years during the Chalcolithic and Early Bronze Ages.
Regional History Museum-town of Pazardzhik is among the most respected museum in Bulgaria. Its funds house over 75 000 cultural artefacts and some of them have been displayed in USA, Japan, Canada, Germany, France, Norway, Spain, Italy, Denmark, Switzerland and other countries.
The museum is beneficiary of numerous national projects and partner of different institutions under EU projects. Pazardzhik History Museum regularly holds international and national conferences, round table discussions and symposiums.
The museum building provides accessible environment to people with disabilities.
At the incorporation meeting of the Bulgarian Museum Association held on 30 November 2012 in the city of Ruse, the Regional History Museum-town of Pazardzhik represented by its director Boris Hadzhiyski has been elected as chairperson of the steering committee of the association. Three years later on 26 November 2015 Pazardzhik History Museum representative is re-elected as chairperson for a second consecutive mandate. As of 24 May 2016 members of the association are 97 national, regional, municipal and private museums.