The church is located in the village of Patalenitsa at the foothills of the Rhodope Mountain, 15 km away from Pazardzhik. The village is 370 metres above the sea level.
There are different opinions among the specialist about the exact time period when the church was build. Academician Krastyu Miyatev and Neli Chaneva-Dechevska that studied the church architecture in 1965 believe that is has been built in the period end of 12th century – beginning of 13th century. In 1975 Professor Atanas Bozhkov dates it to the end of 12th century basing his hypothesis on the discovered frescos. In one of his history books issued in Vienna in 1870 Stefan Zahariev writes that the church has been built by duke Gregory Kourkouas during the Green rule he also notes the locals called it Sveta Kutruleshtitsa which may indicate connection with the name of Kourkouas. Some publications refer to a marble plate found in the church bearing inscription with the following text “[by] Gregory Kourkouas, pro[tospatharios] and duke of Ph[ilippopolis], indiction 14, year 6599 (= 1090/1091)”. The plate is preserved in the National Archaeological Museum in Sofia (inv. n. 253). Stefan Zahariev also publishes another translated by him Greek inscription on one of the church walls.
According to legend the church had been covered with soil before the Ottoman conquest of Bulgaria at the beginning of 15th century. That way it had been preserved (the old dialect verb for preserve is kurtulisvam) and that can explain the etymology of the name Sveta Kutruleshtitsa. Over the years a hill formed on that place and the church has been forgotten. However the story of its rediscovery in the mid-19th century is still alive. According to it a local tied his monkey to a cherry tree that grew on the hill. He saw a metal object on the ground and decided to dig around it only to discover that it was a cross. Then people remembered the old story of the buried church and organised an expedition to dig it out. Another legend tells that after a heavy storm a big tree fell on the hill opening a huge hall next to it. The locals decided to explore the whole and found the buried church.
In 1870 the church was reconsecrated, a new wing to the west added and it had been dedicated p the 4th-century military saint Demetrius of Thessaloniki known in Bulgaria as Sveti Dimitar.
The church is crossed-domed with four L-shaped internal structure supports and five-sided apse. The dome is octagonal and lies on top of the supports. The south façade features three two-level high and wide niches with windows. The north façade has two two-level niches situated one above the other also with windows. The church was built of stone, bricks and freestone used mainly in the domes. The church is 9.20 metres long and 7.60 metres wide. It is believed that the building has been reconstructed three times. The church floor was initially covered with marble. At the second reconstruction an opening has been made at the north wall with two pilasters at each of its sides. The floor at the time was made of clay. At the third building stage in 19th century the old west wall is removed and a narthex has been added. This is the present day architecture of the church.
The internal wall and domes of the church used to be covered with medieval frescoes. However at present day only small fragments of them could be seen of them – around 70 scenes and figures, most of which cannot be identified. In the 60s of 19th century the old murals have been hammered out so that the new plaster can stick better. In 1911 the church walls were covered with oil paint. In 1961 have been detected traces of the first mural layer. The frescoes are uncovered and restored in the period between 1970 and 1975 by a team of restoration workers led by Dragomir Peeshev. They managed to uncover large fragments of the original murals. In 1975 the frescoes are studied by Professor Bozhkov who rates highly their artistic value.
The alter vault is adorned by the Ascension of Jesus scene, and in the lower part are visible images of the Church Fathers, the vault left of the apse is decorated with the Resurrection of Lazarus scene and next to it is the Transfiguration of Jesus scene. The sections between the vaults are covered with images of deacons, monks and bishops. The area South from the alter depicts a scene of three young men and a fire oven. On the left pillar before the alter is painted Mary, mother of Jesus and the patron saint Demetrius is pictured on the south pillar in the west part of the building. On the pillars could also be recognised the images of Saint George riding a white horse, Achillius of Larissa and Saint Nicholas.
In 1956 the church has been declared architectural monument of culture of national importance and in 1971 after research has been carried out of its invaluable frescoes it has been declared an artistic monument of culture of national importance as well. In the period between 1993 and 2007 conservation and protection activities are carried out only interrupted by few breaks. In the period between 2011 and 2014 activities for conservation of the frescoes in Sveti Dimitar church have been conducted with the financial support of A.G.Leventis Foundation. 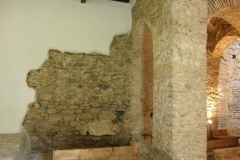 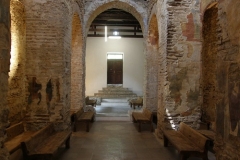 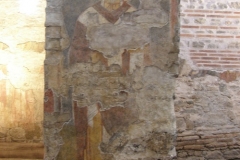