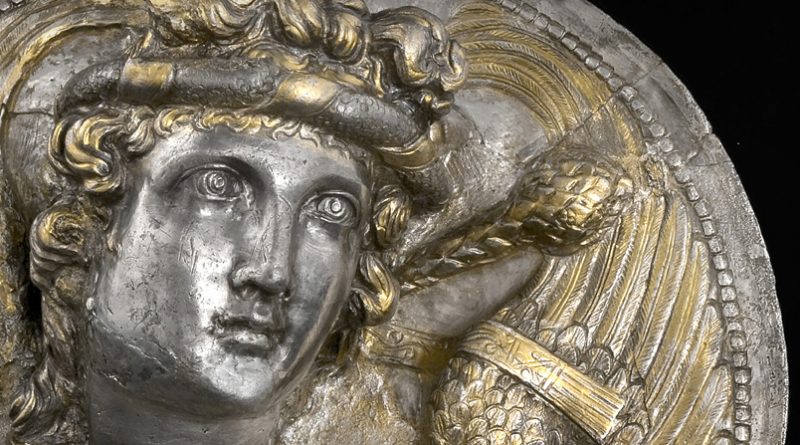 In the period 25 May – 10 June 2016 in Archaeology hall of Regional History Museum-town of Pazardzhik will be displayed the world famous Thracian treasure found in Ravnogor.
It has been found in 1987 during archaeological excavations of Thracian mound necropolis and consists of silver ornamented horse trappings decorated with golden leaf. The separate items are as follows: bridle forehead plate, seven round applications and string of silver beads. The bridle forehead plate is one of a kind on the territory of Bulgaria there is not an item of similar design. Six of the applications are grouped in pairs (used as cheek plates on the two sides of the horse head). The first pair is engraved with busts of goddess Athena wearing a helmet and carrying shield and spear. The second pair depicts busts of goddess Nike whose wings are made with great care to details. The third pair is with busts of goddess Artemis. The last application most probably has been put on the horse chest. It shows a Thracian god that combines attributes specific for Apollo, Nike and Dionysus.
The treasure has been dated to 2nd – 1st century BC.
It has been exhibited in Switzerland, Belgium, Germany, France, Spain, USA and Japan.